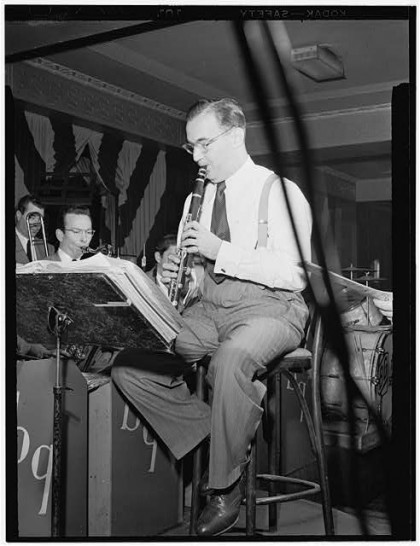 Benny Goodman, like many other great jazz musicians, was privileged enough to grow up in Chicago at the beginning of the jazz era.  Goodman was only ten when he played clarinet for the first time, and he was already making money with it a year later.  By sixteen he had already played in professional bands and was recognized as an up-and-coming artist in the jazz world.  Ben Pollack asked him to join his California-based band at that time, and Goodman stayed with the band for four years, recording with Pollack while recording under his own name in New York and Chicago.  When he turned twenty, he struck out to become a famous musician on his own in New York, getting the opportunity to gain his own celebrity status, lead pit orchestras, and record more music.

In the mid-1930s, Goodman had his own, established band and heard about auditions for an NBC show called “Let’s Dance.”  His band auditioned and earned one of the main slots on the show, but that was not good enough for Goodman who worked with his band until they had developed a new, hot form of music called swing.  Swing was a huge, musical phenomenon and earned Goodman the title “King of Swing.”

In 1935, Goodman took his swing band on the road.  The tour was a flop at first, but the final show at the Palomar Ballroom in Los Angeles turned that around.  “Let’s Dance” was a hit with the Los Angeles youth, and they turned out in droves to listen to Goodman’s music.  The show made headlines, leading the band to extend their tour and launching Goodman to the pinnacle of his career, the top of which was his performance in Carnegie Hall on January 16, 1938.  His band performed on a stage traditionally reserved for classical music and, specifically, the New York Philharmonic.  It was not just Benny Goodman’s greatest debut; it was also jazz’s debut on the world stage.

Benny Goodman went on to play with many jazz greats, including: Louis Armstrong, Billie Holiday, Count Basie, Ella Fitzgerald, Bessie Smith, and many more.  His career spanned more than six decades, and his influence on music will last forever.  He developed swing into a massively popular form of music and lifted jazz and big band music to the level of critically approved music.  He reigned as the King of Swing until his death in 1986 at the age of seventy-seven.