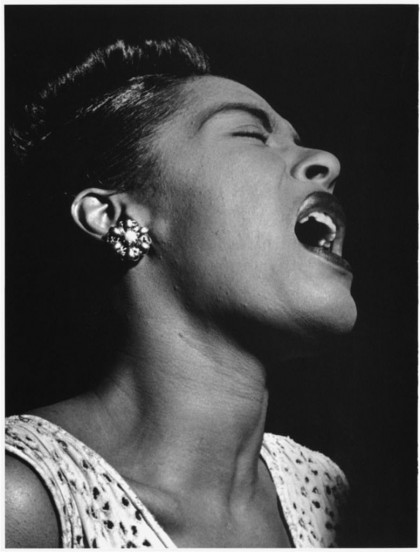 Billie Holiday sang jazz in her own, unique way, altering the course of pop music forever.  Hints of her original style can still be heard in the soaring vocals and impressive improvised tunes done by many pop “divas” today.

Holiday, whose birth name is Eleanora Fagan, grew up in Baltimore in the Jazz Age of the 1920s.  She sung along with jazz records in various clubs as a youth, practicing her vocals before moving with her mother, Sadie Fagan, to New York in an effort to find better work for both of them.  Being in New York allowed Holiday to make her true singing debut in Harlem nightclubs where she embraced her stage name.  Even though she never actually learned to read music, she quickly became a large part of the jazz community, performing with piano accompaniment or with large, vocal groups.

Holiday was finally able to cut her first record at the age of eighteen, working with a studio group led by Benny Goodman.  In 1935 she covered a few songs that went on to become hits, including “What a Little Moonlight Can Do.”  She then had her own contract in 1942, letting her record many tracks that would ultimately become building blocks of early jazz.

Billie Holiday’s star continued to rise.  She joined Count Basie in 1937 and then Artie Shaw’s big band in 1938, making her one of the first black women to perform with a white orchestra.  Throughout that decade, Holiday was recording some of her biggest hits with Columbia Records.  The song “Strange Fruit” became one of her most famous songs. But since it was based on an emotional poem about the lynching of a black man, Columbia would not let her record it due to the ugly subject matter.  Holiday still thought it should be recorded, and she partnered with Commodore Records to get it done. She also closed her nightclub shows with the controversial, chilling song of terrorism, then cut the stage lights; no encore.  If club owners protested, she canceled the gig. She almost always got her way, she was such a huge star.

Holiday later recorded around 100 new songs with Verve records during the 1950s when her voice became noticeably more rugged than earlier in her career.  Her final recordings were done with MGM in 1959.

Holiday died an untimely death at the age of forty-four.  She remains a musical legend today, and the gardenias that she wore in her hair are still her trademark.  Her emotive voice and musical techniques are still admired today, and her moving autobiography Lady Sings the Blues paints the portrait of her life and struggles to survive while managing to become a jazz icon.

Here is a fruit for the crows to pluck
For the rain to gather, for the wind to suck
For the sun to rot, for the tree to drop
Here is a strange and bitter crop