Founding Board Member, Artistic Director and Bandleader. (alto/tenor/soprano saxophones, clarinet, flute, piccolo, oboe) Born into a family of musicians, York was introduced to the music of Charlie Parker in the 9th grade, thus igniting his exploration and love for jazz. He attended Southern University at Baton Rouge as a music education major and became the first jazz studies major under clarinetist Alvin Batiste. After graduate study in classical saxophone at the University of Michigan under Donald Sinta, York toured with the Duke Ellington Orchestra under the direction of Mercer Ellington. In 1977 he formed his own band, Vincent York’s New York Force. York has 2 recordings, Blending Forces and The new York Force, which was voted Best Jazz Album of the Year by MetroTimes. York has recorded and/or performed with noteworthy jazz artists including Ray Charles, Marcus Belgrave, Louis Smith, Ella Fitzgerald, Sarah Vaughn and Motown stars such as The Temptations, The Four Tops and Aretha Franklin. He was also the musical director for Martha Reeves 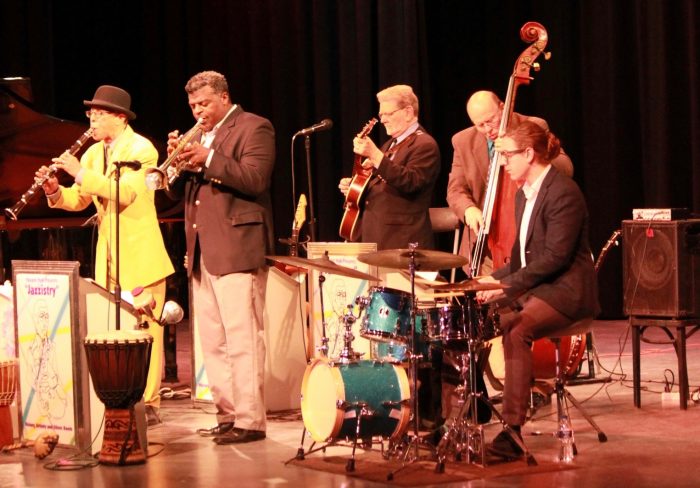 As Jazzistry’s bandleader, Vincent York draws on the wealth of outstanding local professional artists to unveil the story of jazz to audiences of all ages, time and again, each time with different twists and fresh interpretation.Every artist performing in Vincent York’s Jazzistry has a distinguished career as an independent professional jazz musician. The personality of each musician and the character of each instrument contribute to the collective voice that tells this historic and American story.

John Douglas began his music career while studying at the University of Michigan. In 1991 John and five others formed the band Jazzheads, they earned great success and were bestowed with 3 awards in 1999: the Detroit Music Award for Best Jazz Recording, Best Jazz Group Deserving Wider Recognition, and Best Modern Jazz Group. John continued to tour the US, Canada and Europe with many prominent performers, such as Gladys Knight, Marshall Allen and the Chi-lites. Returning home to Detroit, he formed the John Douglas Quintet, known for bringing energetic bebop and powerful funky jazz style to audiences all over the world.

We were saddened by the loss of Jazzistry’s founding bass player, John Dana in 2018. John Dana has been a fixture on Detroit’s jazz scene since the 1960s. John is a respected musician, educator and composer. His working experience is wide-ranging and includes stints with Art Blakey’s Jazz Messengers, Rita Moreno and the Glenn Miller Orchestra as well as Storytellers, a Detroit-based group teaching ethnomusicology to youth. We were very saddened to loose John suddenly in 2019, after a brief illness. He will always be remembered for gentle manner, sense of humor and his patience with students.

We were pleased to have Ann Arbor native, bassist Rob Bickley join the Jazzistry band in 2018. Rob received a Bachelor’s of Music from Michigan State University and a Master’s Degree in Music from The Juilliard School of Music. While living in New York Rob served as a teaching artist for Jazz@Lincoln Center. Rob has performed at such venues as The Blue Note, Dizzy’s Club Coca Cola, Small Jazz Club and Alice Tully Hall. Since returning to Ann Arbor, Rob can be heard performing with top musicians including Vincent York, Sean Dobbins, Rick Roe, Jesse Kramer and Mike Malis. In addition to performance, Rob is an active educator as part of the Vincent York’s Jazzistry Band and serving as faculty for the Ann Arbor Public Schools’ Summer Music Program. He is a regular clinician at schools across the area. Rob maintains an active private studio, offering lessons and small group classes. His youthful enthusiasm and impressive musicianship bring much to the Jazzistry program.

Ron English has enjoyed a long career in music which began in Lansing. Ron has deep roots in the blues, Broadway, bebop, avant-garde, funk, Motown and gospel. Ron’s talents are varied and include composer, educator, clinician and adjudicator. He has worked with the Detroit Symphony Orchestra and many Motown groups, he has also toured and recorded with the Lyman Woodard Organization, Rahsan Roland Kirk and Eddie Russ – just to name a few. An integral part of Detroit’s jazz scene since the 60’s, he was awarded Metro Detroit’s Best Guitarist 1991 and 1993.

Jesse Kramer is one of the most promising young drummers in Metro Detroit. Jesse has already performed at clubs, theaters, and festivals with some of the top local and national jazz musicians. Born and raised in Ann Arbor, Jesse studied with local masters such as saxophonist Vincent York and drummer Sean Dobbins. While still in high school, Jesse was awarded a Downbeat Magazine Student Music Award for best group, and his trio performed at Detroit Jazz Festival.

Gary Schunk has earned much acclaim as both an acoustic pianist and as electronic keyboardist for his own electric jazz trio Schunk-Starr-Dryden. In 1995, Gary was chosen as one of ten winners in JAZZIZ magazine’s “Keyboards on Fire” contest. His composition, Backward Glance, is featured on the JAZZIZ compilation CD as well as his independently produced debut CD, The Key Player. Gary has played with numerous jazz greats, including Joe Williams, Earl Klugh, Pepper Adams, David “Fathead” Newman and many others.

Al McKenzie is an accomplished pianist, music director, composer, arranger, band leader and educator. Al has toured extensively with many recording artists including The Temptations, The Four Tops, The Motown Group, Anita Baker, Martha Reeves, The Spinners and Etta James, just to name a few of many. As former music director and keyboard player for The Temptations he offered his wide-ranging experience and innate talent to promote and enhance the close soul harmonies and fancy footwork of one of Motown’s legends.

Dwight Adams hails from Detroit and has long been considered a gifted musician. At the age of 16 Dwight appeared with the Teddy Harris New Breed Be-Bop Society Orchestra. Dwight has twice received the Metro Times Spirit of Detroit award (1993 and 1996), he leads The Dwight Adams Quartet, is featured in many Detroit bands, has toured with Stevie Wonder, and has played and recorded with Vincent York’s New York Force.

Rick Roe won First Place in the Great American Jazz Piano Competition in 1994, and was a Semifinalist in the Thelonious Monk International Jazz Piano Competition in 1993 and 1999. Rick has also been a featured performer in the Jacksonville (Florida) Jazz, Savannah (Georgia) Onstage International Arts, Montreaux/Detroit Jazz, Birmingham Jazz, Lansing Jazz, Flint Jazz, and Hawaii Jazz Festivals. Rick has served as a clinician and educator at the University of Arizona, North Texas University, Michigan State University, the University of Nevada, Las Vegas, the University of Michigan, and the Montreaux/Detroit Jazz Festival.

Zach Saginaw is an electronic music producer and drummer. Zach trained as a jazz drummer and calls his music “instrumental, electronically-produced music that is jazz and hip-hop influenced.” Growing up in Ann Arbor he was heavily influenced by old jazz and Motown artists and developed his sound in the Detroit music scene. He has released four studio albums with the record label, Ghostly International, since 2010 in addition to releasing three EPs since 2008. In 2015, he played electronics for Dave Douglas’s High Risk project with drummer Mark Guiliana. Zach has also done multiple North American and International tours.

This site uses Akismet to reduce spam. Learn how your comment data is processed.